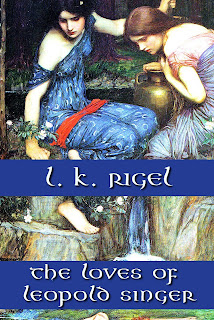 The one who loves him can't have him. The one who has him can't love him.Leopold Singer is any woman's perfect match - handsome, brilliant, and rich. Lady Delia wants him for his fortune, and Susan Gray wants him for his intellect, but his heart belongs to Marta Schonreden. When Leopold and Marta visit London on their move to Massachusetts, Delia is consumed by jealousy and she plots to ruin Marta. Susan has the real power to destroy Leopold's marriage, but to use it she would lose everything she holds dear. Who could guess that one day Susan's secret would be the key to everyone's happiness?This old-fashioned family saga spans the late Georgian through Regency periods, 1776 to 1832, from Austria to Massachusetts and London to Jamaica.

This is the book of my romantic imagination. It's a family saga - a soap opera full of all the things you're not supposed to write about - secret babies, religion, amnesia. It covers two generations (1776 to 1832) and has way too many characters. Think Middlemarch meets Hawaii.

Leopold Singer of the title is modeled on Orpheus of Greek mythology.  The women in Leopold's life are like those who loved Orpheus. He chooses one, but the others love him no less.

Unlike my usual books, LOLS is reality based. No magical or paranormal creatures, though of course with a setting in 19th century England (and Austria and the Caribbean and Massachusetts) there is talk of fairies and loa and mermaids.  LOLS is more "women's fiction" than romance in that the happily ever after doesn't always take the form of a man and woman ending up together forever, but it's definitely chock-a-block with love stories.

I had the absolute pleasure of meeting LK Rigel in a writer's group online. She is one of those people you meet and just love instantly. This is the second of her books that I've read, and I've yet to be disaopinted by her.

The Loves of Leopold Singer is a wonderfully written historical romance that takes you across the world and back again. I think LK really captures the feeling of the 1800's brilliantly. You fall in love over and over again with these wonderful characters. Halfway through this book, I was actually sad because I knew it would have to end eventually. I was a little nervous about the size of this book at first, but I literally couldn't wait to read it every night before bed.
Leopold Singer is the main character in this book, and the title makes his sound like some sort of cad, I can assure you he not. I've not met such a likable leading man in a long time. LK has interwoven the lives of her characters beautifully. There are bits of intrigue and of course romance. But, what I really enjoyed were the actual historically accurate parts in the story. It made the charcters seem that much more real This book is well worth your time. I highly recommend it